In addition to providing a safe, efficient, and convenient aviation facility at Winston-Salem, Forsyth County and the Western Piedmont, the airport provides substantial benefits to the local community.

fixed-base operator (FBO) is generally described as an operation that provides services and facility amenities to aircraft, pilots, and passengers. At Winston-Salem Airport, Signature Flight Support is the sole provider of FBO services. Signature Flight Support has grown to become the world’s largest network of FBOs, with over 100 locations providing consistent, exceptional service. Signature’s worldwide compilation of FBOs deliver essential support services for business and private aviation, including refueling, hangarage, and a variety of other amenities essential to the safe and efficient operation of an aircraft. At Smith Reynolds Airport, Signature offers a number of amenities and services including:

In addition to the amenities and services listed, Signature also has onsite equipment to service lavatories, and stairs to unload passengers from larger aircraft. Please visit their web site for additional information.

The primary runway at Smith Reynolds Airport (INT) is Runway 15/33 which has a length of 6,655 feet and a width of 150 feet. The runway is constructed of asphalt and is grooved to provide additional traction during wet weather conditions. In 2008, Runway 15/33 was rehabilitated with an asphalt overlay and was then re-marked with precision and non-precision markings. Currently, the airport has an ILS approach to Runway 33, GPS approaches to Runways 15 and 33 and a VOR/DME approach to runway 15. To aid pilot visibility during instrument conditions, runway end identifier lights (REILs) are installed near the threshold of Runway 15; whereas, a medium intensity approach lighting system with runway alignment indicator lights (MALSR) is installed prior to the approach end of Runway 33. 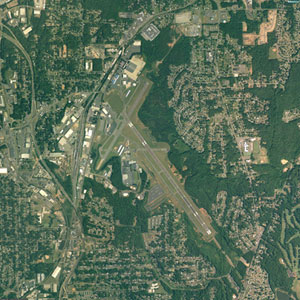 Runway 4/22 serves as the crosswind runway at INT. It has a length of 3,938 feet and a width of 150 feet. This runway is primarily used by small, general aviation aircraft or by flight schools to conduct their training activities. Runway 4/22 currently does not have the instrumentation or the lighting necessary to accommodate aircraft operations during instrument conditions.

Each runway at INT is supported by a full-length parallel taxiway. Taxiway ‘A’ serves Runway 15/33 to the west with taxiway connectors ‘B’, ‘C’, ‘D’, and ‘E’; whereas, Runway 4/22 is served by the full-length parallel Taxiway ‘F’ with taxiway connector ‘J’. Taxiway ‘A’ provides access to/from both runways to the terminal apron and Taxiway ‘H’ provides access to/from the large maintenance hangar areas to taxiway ‘F’. Taxiways ‘M’ and ‘N’ provide access to the, centrally located, South T-hangars.

The Aircraft Rescue and Firefighting (ARFF) facility is located on the south side of the airfield between runways 4/22 and 15/33 and is accessible from N. Liberty Street by taking Fairchild Rd. which turns into Aviation Drive. Aviation Drive leads directly to the ARFF facility, airport maintenance, and to the Heritage maintenance hangar. 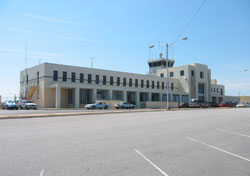 The FAA has informed the County that they are no longer considering a project that would require the purchase of 16 homes on Teresa Avenue. The FAA District Office in Memphis is only considering reconstruction options for the existing Taxiway which is on the other side of the runway. On March 16, 2021, the County received a letter from the FAA that conditionally approved the Modification of Standard request, which was required in order to move forward with the reconstruction options for the existing Taxiway. Preliminary plans reviewed by the FAA, depicts portions of Taxiway Alpha relocated approximately 120 feet, while other portions move approximately 30 feet. This is being done to improve safety at the Airport for all users and to minimize any impacts to the community.

Providing a safe, efficient, and convenient aviation facility at Winston-Salem, Forsyth County and the Western Piedmont.